Make sure you head downtown to Providence August 20-23 for the citywide celebration of H.P. Lovecraft's 125th Birthday. NecronomiCon Providence is the world's foremost celebration of author Howard Phillips Lovecraft (and his influence) right here in the hometown he loved. The amazing part of this celebration is the opportunity for Lovecraft fans that might not be able to attend the convention to enjoy four days of public events at a very nominal price.

1)    Lovecraft Grand Emporium, August 20-23 at the Rhode Island Convention Center. Stunning array of more than 60 vendors from all over the world, featuring the best booksellers, publishers, print artists, sculptors, jewelers, and general purveyors of top-tier weird. Daily hours vary each day and the admission fee is $5.

3)    The Opening Reception of the Ars Necronomica exhibit featuring world-class Lovecraft-inspired works. The event begins at 6:30 p.m., taking place at the Providence Art Club August 20-23. (No charge for admission.)

4)    Ars Necronomica Print Exhibit at Julian's on Broadway. Fans have the opportunity to purchase print pieces after viewing the samples at the restaurant. Exhibit runs August 20-23.

5)    The Official Lovecraft Birthday Bash takes place Thursday August 20 at 7 p.m. in the Façade Lot at 35 Weybosset St. Sponsored by Narragansett Beer, the event will feature musical acts, movies, food and fun. Musical acts will feature Alec K. Redfearn & the Eyesores along with the Big Nazo Intergalactic Band. On the big screen, there will be a music/video mashup by Frank Difficult and a special 10th anniversary screening of HPLHS's "Call of Cthulhu." (No charge for admission.)

7)    Live Theater Performances - from August 20-23, including an exclusive script reading of the TV pilot "NecronomiCon" currently being pitched. Open to the public for $5 admission, schedule online.

8)    The Rhode Island Historical Society will be offering a special H.P. Lovecraft Tour commemorating his 125th birthday on Saturday, August 22 at noon. The tour admission fee is $10 and will depart from the John Brown House. Reservations are highly recommended and can be made by contacting bbarnes@rihs.org.

9)    A Columbus Theatre Concert on Saturday, August 22 includes the following musical acts: Earth, Elder, Assembly of Light Choir, and Owlfood. The concert begins at 9 p.m. with a $20 ticket price in advance or $23 at the door.

10)   Sunday evening at the Columbus Theatre will bring a Rocky Horror Picture Show-style send-up of the 1970 film, "The Dunwich Horror." The event will feature a live band, stage actors, audience participation and, of course, lots of weirdness! The show starts at 9 p.m. with a $5 admission fee.

Lastly, don't forget to check out the Lovecraft store open in the historic Arcade Providence, located at 65 Weybosset St. To view the complete schedule and lineup of events go to necronomicon-providence.com. 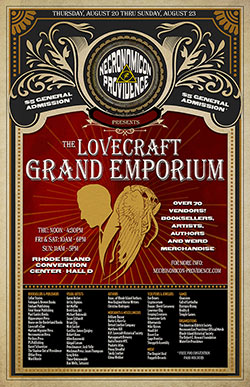 Christina Robbio, originally from Massachusetts, has had a lifelong passion for public relations and communications. Graduating from Providence College with a degree in marketing and a concentration in pre-medical sciences, she began her career in the pharmaceutical industry. She served as sr. business development manager with L'Oreal USA, managing two national brands, Redken 5th Ave and Pureology, propelling her into the PR and fashion world. She developed a love for the city of Providence while serving as vice president for StyleWeek LLC. She joined the Providence Warwick Convention & Visitors Bureau as communications & social media manager, and looks forward to highlighting and promoting all the city has to offer. In her free time, she enjoys spending time with her family, friends and Pomeranian Sophia, as well as reading and traveling.