A Taste of the Good Life on Federal Hill

As clouds burned off from summer's heat, the sun finally poked out just in time for the kickoff of the 15th annual Federal Hill Stroll. With nearly 1,300 tickets sold, folks enjoyed sampling a variety of signature dishes from some of the best restaurants in the Ocean State. Those who purchased a ticket for the Stroll also received two complimentary drink tickets. 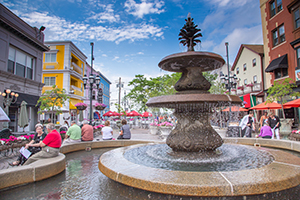 With another successful stroll in the books, participants handed in their voting ballots, content with full-tummies on what turned out to be a beautiful day in the heart of Providence. After tallying up the votes, D'Vine on the Hill won Most Creative Venue and Andino's Restaurant won King of the Hill. All of the participating restaurants received rave reviews from happy diners, proving why Federal Hill has been ranked one of the best Little Italy establishments in the United States.

Christopher Siravo is a student-athlete at Rhode Island College, currently entering his senior year. Christopher is a communications major with a focus on public relations. An intern at with the PWCVB and the Rhode Island Sports Commission since October of 2013, Christopher also works part-time at a sports bar in Narragansett, RI. His interests include playing baseball, fitness, and spending time with family and friends. Christopher plans to finish his degree at RIC and head straight into a full-time media job with a sports organization.