Christmas came early this year for area sports fans as it was just announced Providence will play host to the 2015 NCAA Division-I men's ice hockey regionals. The games will take place at the Dunkin' Donuts Center and feature some of the country's best collegiate hockey teams. The regional tournament was last held here this past year and attracted more than 11,000 fans. The downtown arena is a popular site for sporting and entertainment events, given its close proximity to area hotels, restaurants and transportation options. 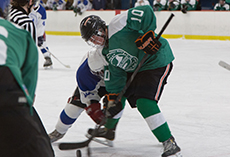 In an added bonus for area hockey fans, the competing teams will be fighting for a chance to advance to the Frozen Four, which will be held in Boston that year.

The booking comes as a result of a collaborative effort between the Rhode Island Sports Commission (RISC), the Dunkin' Donuts Center, and the host school, Brown University. The RISC and Brown also partnered to secure the NCAA men's lacrosse national quarterfinals in 2016. The RISC is a division of the Providence Warwick Convention & Visitors Bureau.

Brian Hodge is the Communications & Social Media Manager at the Providence Warwick Convention & Visitors Bureau. His interests include live music, interesting architecture and excellent eats - all things Providence has in spades.